This beutiful image I stole from the British Museum Pin Interest page.  I think it is facinating.

I showed it to a nurse who specialises in teaching breast feeding who told me that it was really well observed.  Although the, and here words fail me I dont know what to call a baby centaur fowl? baby? Bawl?, is in the wrong position to feed the centaur herself is holding her breast in the correct way.  So the breast position is correct and well observed.  Its obvious that the artist has seen successful breast feeding and I suggest that this shows that breast feeding in the Medieval period was far more normalised than in the modern period.

My second observation is that this is a very beutiful centaur, far more actractive than the Greek ones I saw in the Museum of Classical Archaeology in Cambridge.  I note that her foreleg is held high as if she were doing dressage.  A beutiful horse and a beutiful angel like face. 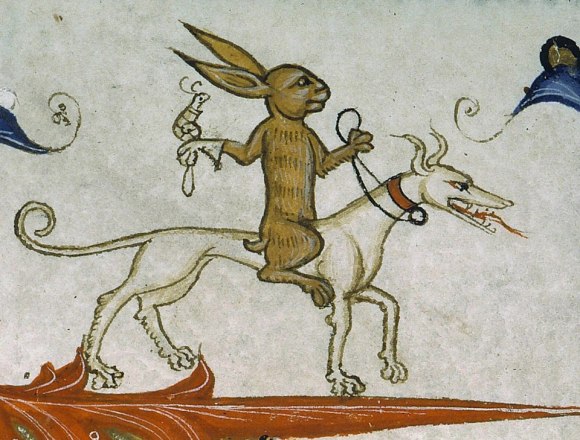 This is a fascinating image.  It shows a rabbit in the role of a noble.  He is riding with his hawk as any noble would but this is absurd.

First of all the noble is replaced with a rabbit.  Rabbits are an easy subject for anthropomorphic fantasies.  In the modern day, we can think of Brer Rabbit, Peter Rabbit and Buggs Bunny so I suspect this character, long lost in the midst of time, is of the same ken.

Just like Buggs Bunny and Peter Rabbit he has turned the tables on his hunter.  He is riding a hunting dog like a pony.  In this next image, the rabbit is thuming his nose, the classic insult from Shakespeare’s Romeo and Juliet at a dog hanging from a tree.  Clearly, the Medievals enjoyed as much as we do the reversal of fortune between the hunter and hunted.  Remember the black humour of those poachers being eaten by lions.

I suspect that the rabbit heroes were also representative of the class struggles of the Medieval town in the same way that Raynard the Fox represented the struggles of a good man living in an evil time.  The black pleasure of the evil henchman being tricked into a difficult situation by his greed.

The absurdity of the image is completed by the hawk.  Complete with glove the rabbit is going hawking with a snail.  The speed, grace, and beauty of the falcon replaced by the slimy, slow and clumsy earthbound snail.